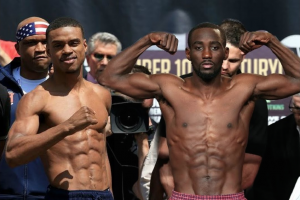 This is quite simply one of the premiere matchups in the sport of boxing. Both are currently welterweight belt holders, with Spence (24-0, 21 KO) the IBF titlist and Crawford (34-0, 25 KO) the WBO champion. Spence, 28, is a physically imposingsouthpaw wrecking ball with solid skills. Every one of his punches is delivered with bad intentions. The 31-year-old Crawford is an all-around technician, who can dissect his foes from both the orthodox and southpaw stances. He’s not only sound, but he’s ornery inside that squared circle.

As you see the ESPN pound-for-pound list, it’s Crawford — who has won titles at 135 and was the undisputed king at 140 – who is listed at No. 2, while Spence is at No. 6. But based on being the natural 147-pounder, it is Spence who is rated higher in the welterweight division.

There’s no doubt that these two talented American-born boxers are well aware of one another. Back on Nov. 16 at the Chesapeake Energy Arena in Oklahoma City, during a card featuring Maurice Hooker’s defense of his WBO junior welterweight title, both champions were in the building and weren’t afraid to confront one another. Let’s hope it’s not the only time they ever come face to face.