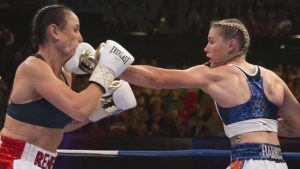 Tayla Harris remains unbeaten in her five bouts. Harris took on Renee Gartner, another Australian native, and she showed more of her athleticism in the sport of boxing, down in their native Australia. Harris threw several picture-perfect right hands catching Gartner and she utilized her jabs, hooks and uppercuts, many of them landing especially in the second round of her fight against media personality Renee Gartner. Harris wins the contest as the referee halted the fight and gets her first knockout. Gartner was unable to match Harris; the fight was stopped five seconds before the bell was due in the second round. Harris, fighting for the first time since being immortalized in the most stunning sport’s photo of the year remains undefeated in the ring.