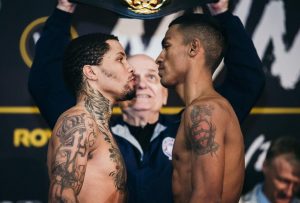 Fighting in front of his hometown fans in Baltimore, MD for the first time, WBA super featherweight champion Davis took the mandatory fight in his division, so he took the mandatory challenger Ricardo Nunez out in the second round. The crowd was up and ready for and for Davis in the opening stanza, but the man nicknamed “Tank” took his time and eyed his opponent. Nunez (21-3, 19 KOs) fired a few jabs and kept moving to his left. Davis not only is a southpaw, but he continued to move forward use double jabs. In the Seconds round he landed a hard left in addition to landing a number of hard body shots and Nunez, 25, had seen enough even though he connected with an uppercut in round two. He was moving his hands to keep Davis busy, but Davis forced Nunez, who was gazing at the crowd, onto the ropes and unloaded several shots. Two big shots landed, buckling Nunez, followed by a right and left rendering Nunez virtually helpless. Gervonta Davis overwhelms Ricardo Nunez with power, wins by stoppage easily, as Referee Harvey Dock jumped in and stopped the fight. Nunez didn’t complain.