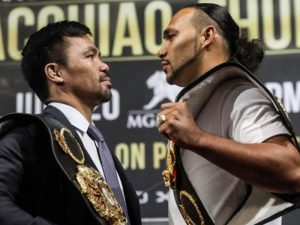 Pacquiao handed Thurman his first loss. Pacquiao faced the biggest challenge of his career since his epic unanimous decision loss to Floyd Mayweather Jr. Pacquiao faced against World Boxing Association World Welterweight champion Keith Thurman, who had never lost a fight in his professional career, he did his best, and clearly remained the aggressor and stalked Pacquiao all night, and kept Pacquiao at a distance by applying pressure even throwing and landing hard rights. Thurman had his moment but he just look a little unsteady and uncomfortable in the ring. Pacquiao delivered combinations to the body and head, when Thurman missed the seasoned veteran, Pacquiao made him pay and he closed every round hard. Pacquiao was the slight favorite and did not disappoint his fans or the boxing world by taking away Thurman’s belts. It was a sea- saw battle of the Titans, from the opening bell either one not giving in. Both Pacquiao and Thurman fought their hearts out, but when the battle was said and done Pacquiao won the decision and won the belts!