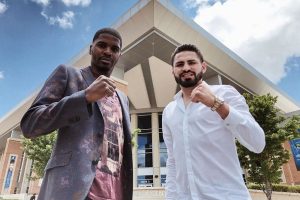 These two undefeated super lightweights in a WBO and WBC unification bout, billed “as too tough to call” everyone wondered, will it be Hooker with the long reach and right hand or will it be the pressure of Ramirez and his signature left hook? Ramirez started off fast, focused, furious and just came forward. In the first 30 seconds, Hooker stumbles against the ropes and is down in round one. It was a trip Ramirez stepping on Hooker’s feet. Nonetheless, a knockdown was ruled, went to Ramirez. The fight had good action. Ramirez has went back and forth. Hooker was being patient. Looking for the big right hand after his jab. Hooker seems to be settling down and getting his range. Ramirez worked behind the jab and closed the gap. In the 5th both fighters exchanging back and forth. Ramirez was getting the better of the action when Hooker was on the ropes. The fight was close. But in sixth both fighters are going toe to toe when Ramirez catches Hooker and knocks him out. Ramirez hit Hooker with a vicious left hook and Hooker was out on his feet against ropes bleeding from his mouth. Ramirez wins and unified super lightweights in a WBO and WBC.