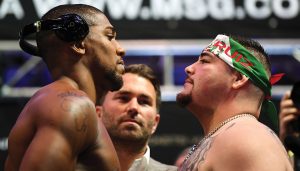 Ruiz came in as a +1125 underdog to score one of the biggest upsets in heavyweight championship boxing history. The unthinkable happened when Andy Ruiz Jr. shocked the world and scored an upset seventh-round TKO win over Anthony Joshua to become the WBO, IBF and WBA Heavyweight Champion. Joshua rocked Ruiz and dropped him with a picture-perfect left hook. Things looked bleak for the challenger. Then Joshua went in for the kill, but he got careless, and the sturdy Ruiz was waiting. He clipped Joshua with his own left hook on the ear. Immediately, Joshua’s legs were wobbly. Ruiz then scored his own knockdown. Moments later, Ruiz would drop Joshua again. Joshua barely made it out of the round. In the fourth, fifth, and sixth rounds, Joshua tried to regain his composure, but he struggled to find his legs. In the seventh, Ruiz completed his masterpiece by dropping Joshua two more times. After the last knockdown, Joshua couldn’t answer the referee’s commands to his satisfaction, and Joshua looked like a beaten fighter, and the fight was stopped. Joshua was done. The win made Ruiz the first Mexican heavyweight champion of the world.