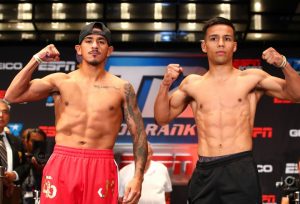 Magdaleno won a technical decision victory over former world title challenger Rafael Rivera. Rivera came to the ring having an advantage as far as being more active. Yet, despite that, Magdaleno put a beat down and took out Rivera. Magdaleno was looking for a new challenge by competing at 126 lbs. With the victory, Magdaleno improves to 27-1, 18 KOs and this was his second fight as a featherweight after losing the WBO junior featherweight title to Isaac Dogboe last year. Both Magdaleno and Rivera were trying to move up in the division to fight better talent and get into title contention. Magdaleno has several options after winning this bout and looking impressive over Rivera. He may want to re-visit Isaac Dogboe in a rematch or sideswipe him and move down to fight Emanuel Navarrete.