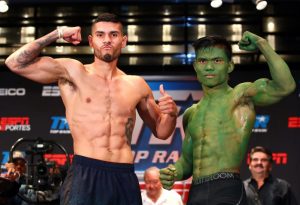 Barboza dished out a sustained beating to the Philippine Native Sismundo in the super light division fight on the under card of Emanuel Navarrete vs. Francisco De Vaca. Sismundo’s corner saw enough and stopped the bout following the conclusion of the fourth round. Sismundo seemed wary after he got caught several times by Barboza. Barboza who seemed to have the fight and still had a lot in his tank was ready to go into the fifth round when the bout was halted. With this win, Barboza wins a world title shot – and he doesn’t care if it’s with Jose Ramirez, Regis Prograis or Josh Taylor. Top Rank promotes Ramirez, like Barboza, while Prograis and Taylor are slated to collide in the final bout of the World Boxing Super Series. “I want a world title shot now,” Barboza said. “I want to challenge all the champions. It doesn’t matter who it is, or where it takes place. All I want is to face Ramirez, Prograis, or Taylor, and I want it now!” After his victory, Barboza, a super lightweight contender, shouted out from Banc of California Stadium, “I want Jose Ramirez.”