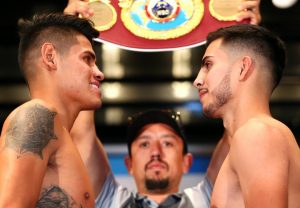 Navarrete showed us that he is ‘the real thing’ against anyone. Navarrete retains his WBO super bantamweight title easy by dominating his opponent and stopping the previously unbeaten challenger in three rounds. Navarrete came out swinging from the first bell and never let up on the 24-year-old De Vaca. Navarrete, 24 years old, was just too much for the unknown De Vaca. It was evident that De Vaca was overmatched and didn’t have the power to even faze Navarrete, who charged forward and did consistent damage. De Vaca was dropped in the second round and Navarrete finished him off with a third round barrage of punches that ended when referee Raul Caiz Sr. stopped the fight at 1:54 minute of the third round. De Vaca really never knew what he signed up for or never knew what he was getting into when facing Navarrete. The Mexican star fighter with an aggressive style proves again he is ready to take on any opponent.