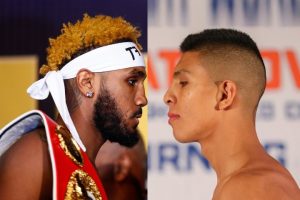 Middleweight Hurd (23-0, 16 KO) marked himself as the best 154-pounder on the planet after his victory over Austin Trout (TKO 10) last year and his thrilling unification victory over Erislandy Lara in April, giving him possession of both the IBF and WBA belts. The 28-year-old from Maryland is one of the most crowd-pleasing fighters in the game. A 22-year-old from Tijuana, Mexico, Munguia (31-0, 26 KO) burst into the boxing scene this past May, coming in as a late sub for Liam Smith and bludgeoning Sadam Ali in four rounds for the WBO strap. He had an incredibly productive 2018, making two more title defenses and fighting five times in total. He’s poised to be the next popular Mexican fighter with his rugged, take-no-prisoners style.