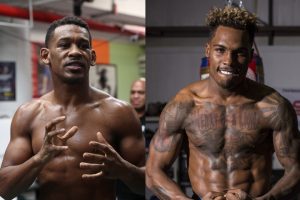 Jacobs (35-2, 29 KOs) just picked up the IBF title by defeating Serhiy Derevyanchenko over 12 rounds in October and has clearly established himself as one of the elite 160-pounders in the world. Charlo (28-0, 21 KO), a former belt-holder at 154, is more a product of the eye-test at middleweight, having only defeated the hobbled Jorge Sebastian Heiland (TKO4) and Hugo Centeno Jr. (KO2) during his short stint in the division. His fearsome reputation took a hit as he was extended the distance in his latest bout on Dec. 22 by Matt Korobov, a late replacement, who some believe may have done enough to get his hand raised in victory. Both are still highly regarded: Jacobs, 31, is ranked third by ESPN, while Charlo, 28, is ranked. The fight against them will be a bit of a grudge match as the fighters got into a verbal altercation on March 3 at the Barclay Center in Brooklyn on the night Wilder faced Luis Ortiz.