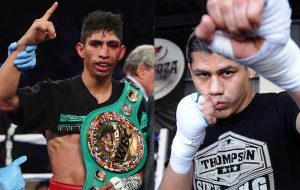 If there’s anybody who can deal with the freakishly tall Vargas, it’s Roman, the reigning WBA champion, who has consistently chopped down boxers who have more than a couple of inches on him. His latest victim was Gavin McDonnell, who was stopped in 10 rounds in Chicago in early October. 28-year-old Roman has become one of the game’s truest technicians, making up for his lack of strength with a myriad of other skills.