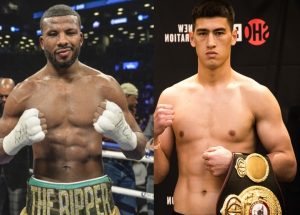 Bivol (15-0, 11 KO) is the defending WBA light heavyweight champion coming off two decision victories against Isaac Chilemba and Jean Pascal. While the matches weren’t close, Bivol definitely exerted himself in his battles against these aging veterans. Since getting stopped in one round by Derek Edwards as a prospect in 2014, Jack (22-1-3, 13 KO) has steadily improved, developing into a world-class prizefighter. He was able to capture a super middleweight title by defeating Anthony Dirrell in 2015 and then proceeded to make successful title defenses against George Groves and Lucien Bute. Soon after, he won the same WBA title as Bivol by defeating Nathan Cleverly in five rounds in 2017. Jack was hoping for a rematch against former WBC titlist, Adonis Stevenson, but Stevenson is recovering from a brain injury suffered in the match against Oleksandr Gvozdyk on December 1st. A match against Bivol and Jack would decide who is really worthy of the WBA title.