In the tradition of delivering pugilistic action on Mexican Independence Day Weekend, Jaime Munguia (33-0, 26 KOs) will take on Patrick Allotey (40-3, 30 KOs) in a 12-round fight for the WBO Junior Middleweight World Title at Dignity Health Sports Park in Carson, California. The event will take place on Saturday, September 14.

“We’re excited to be able to continue this tradition that we know many fans anticipate, and this year we’re putting on a series of exhilarating fights that will make for an entertaining night,” said Oscar De La Hoya, Chairman and CEO of Golden Boy. “Jaime Munguia is an undefeated world champion who has become one of Mexico’s biggest boxing stars. Meanwhile, Patrick Allotey has an impressive skill set with years of experience under his belt. The styles are guaranteed to make a war. We’ve also put together a full card of action in order to celebrate Mexican Independence Day.” 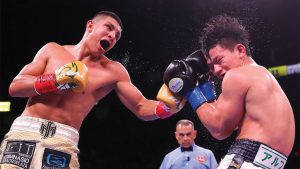 Munguia is a 22-year-old world champion from Tijuana, Mexico who catapulted to the highest levels of the 154-pound division by knocking out Sadam “World Kid” Ali in May to capture the WBO Junior Middleweight World Title. Since then, Munguia has defended his title against the likes of Liam “Beefy” Smith, Brandon “Bad Boy” Cook, Takeshi Inoue, and Dennis Hogan. Munguia will now represent his country on the most important date for Mexican boxing.

“I feel very happy for the opportunity of headlining a card on September 14,” said Jaime Munguia. “That’s the best date for boxing in the entire year. It’s a great date for Mexico because that’s when we celebrate Mexican Independence Day. I’m proud and honored to be representing Mexico in the festivals for my country. I’ll give my best and I’ll try to deliver a great fight for all the people and for those who will see us.” 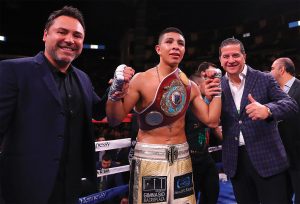 Originally, team Munguia wanted to fight Jesse Vargas and they wanted it to be at a 156-pound catchweight but the negotiations for that fight against former welterweight champion Jessie Vargas fell apart and they couldn’t agree to a deal.

Allotey is a 28-year-old native of Accra, Ghana who debuted as a professional in 2006 when he was only 16 years old. Though suffering losses against Golden Boy’s Patrick Teixeira and standout contender Kanat Islam, Allotey is coming off six victories in a row.

“I respect Munguia. He is a great fighter,” said Patrick Allotey. “But I’m an African warrior, so you know I’ll be coming to cause a big surprise.” In addition, Fernando Beltran, President of Zanfer Promotions said, “I’m very excited for Jaime Munguia’s next fight date as he’ll be headlining on September 14, which is an important date for Mexico. I am very proud because our representative will fight on the most important date for Mexicans.” 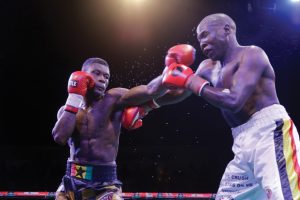 In the co-main event, rising sensation Ryan Garcia (18-0, 15 KOs) of Victorville, California will take on Avery “A Plus” Sparrow (10-1, 3 KOs) of Philadelphia, Pennsylvania in a 10-round lightweight fight.

“Sparrow is basically an undefeated fighter with a good amateur background,” Ryan Garcia proclaimed, “People in boxing that know boxing will know this isn’t an easy fight. It will not be overlooked.”

“I’m thankful to Golden Boy and Russell Peltz for the opportunity,” said Avery Sparrow, “Ryan Garcia has yet to be tested, and it’s a big step up for him. It’s not much of a step up in opposition for me. It’s his biggest test, not mine. I’m good fighting at 130, but nobody wants to fight me there, so I’m moving up to 135. I look forward to putting on a great show.”

“It’s a difficult fight for Sparrow,” said Russell Peltz, “Once again he has to move up in weight from 130 to 135. None of the 130-pounders want to fight him. However, I am not a big believer that weight difference will determine the outcome. The outcome will be determined by who is the better fighter so long as the judges are fair, and I am sure they will be. Garcia has a prettier record, but Sparrow can more than handle himself.”

We look forward to an exciting Mexican Independence Weekend full of boxing, just the way UPPERCUT likes it.