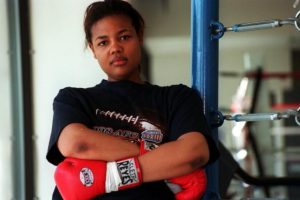 Former middleweight boxer Freeda Foreman has died at the age of 42, according to multiple reports. One of former heavyweight champion George Foreman’s 10 children, Freeda went 5-1 with three knockouts during her brief career in the ring in the early 2000s. A family member at her home near Houston discovered Foreman’s body, noted the Houston Police. Police are awaiting a coroner’s report to reveal what is the cause of death.