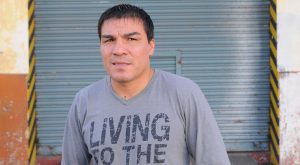 The 48 year old Argentine and former welterweight world-boxing champion, who lost his title to Floyd Mayweather, was sentenced to 18 years in prison for the repeated sexual abuse of his daughter, reports said. Baldomir abused the child for two years beginning when she was 7 years old, the BBC reported. He was arrested in November 2016 and spent almost three years in pre-trial detention. Local newspapers reported the girl was his daughter with a former partner, who had alerted authorities to the abuse, according to BBC Mundo.