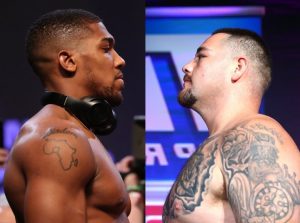 Eddie Hearn of Matchroom in London told the world that December 7 will be the date for the rematch between champ Andy Ruiz Jr and challenger Anthony Joshua, who dropped straps when he and the Mexican-American clashed in NYC June 1. “The epic world heavyweight blockbuster event” is how Hearn put it, sitting next to Omar Khalil of Skill Challenge Entertainment, which is tasked with putting together the foundation for the fight card to be screened by DAZN, live from Saudi Arabia. Saudi Arabia has as of late tried to present another side to itself, and officials there have sought and secured the services of sport’s entities. The World Boxing Super Series had a card there, and Amir Khan brought his talents to the Middle Eastern nation last month.