By Mike Furry for UPPERCUT

Errol Spence Jr. after beating Mikey Garcia is now arguably the most profound division champ in boxing and is set to get a chance to unify the welterweight belts and yet again be champion and the best in this weight class. Yet, Shawn Porter stands in his way. So, on the 28th of September in Los Angeles and when the dust settles, one of two will be going on to the next level by unifying the belts at the 147lbs’ division. 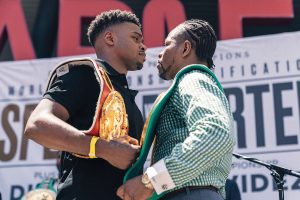 “It’s going to be a very exciting fight,” Spence said “And I simply cannot wait to show the public and all the fighters that I am the best in the division.” Then came the elusive Shawn Porter mimicking Spence saying “Yes we will most definitely find out who the real champ is that night.” “I am never in a boring fight, and I always entertain. It will be a ‘Fight-of-the-Year’ type of fight because our styles mesh.” 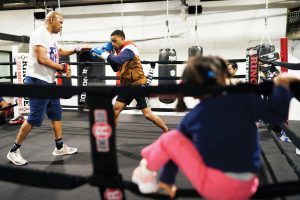 Spence (25-0, 21 KOs), regarded by many as the division’s best, last fought in March at AT&T Stadium in Dallas and soundly defeated Mikey Garcia by unanimous decision. Spence’s use of his jab throughout the fight by mixing it up and repeated use helped control the distance. Spence dominated Garcia throughout with a stinging jab and a barrage of combinations as Texans cheered wildly as he used his superior skills, height and reach advantage on Garcia to school and out class him. The pay-per-view card did a reported 325,000 buys helping establish Spence as a marquee attraction in the sport.

The 29-year-old Texas native is a 2012 Olympian and looks to defend the belt for the fourth time after capturing the IBF strap from Kell Brook by 11th round knockout in May of 2017. Spence invited Pacquiao into the ring and challenged him to a fight, but Pacquiao chose to take on Thurman instead. Spence improved to 25-0 but failed to get the knockout he wanted against Garcia in his third defense as his KO streak was stopped at 11 fights. This is just the fourth time in his career that the former Olympian didn’t knock out his opponent. 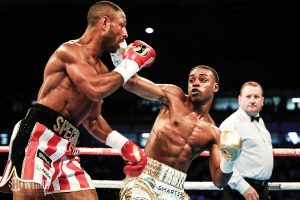 Porter (30-2-1, 17 KOs) has been calling for a fight with Spence since he won the title by unanimous decision from Danny Garcia in September. Spence even got into the ring afterwards, and it appeared that that would be the next direction for both fighters.

Porter is constantly moving and has an intense punch; he also has broad shoulders and a thick upper body that withstands punches from his opponents. His father that knows his son capabilities trains him and Porter compiled 276 wins as a standout amateur, gaining some major experience before becoming pro. He will have to bring this background and then some when he walks into the ring with Spence. 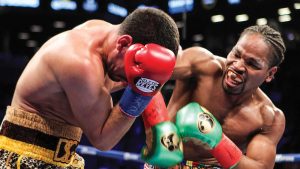 The victor is expected to face Manny Pacquiao who just beat Thurman in a exciting fight, so keep up with the latest with UPPERCUT Boxing to get all the boxing lowdown.